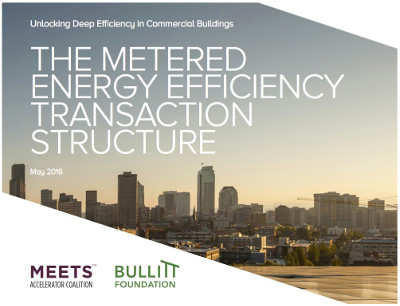 We are pleased to announce the successful operation of MEETS – the Metered Energy Efficiency Transaction Structure.

The MEETS Pilot Interim Report, examining the agreement between the Bullitt Center and Seattle City Light is available.

Seattle to Expand First in the Nation ‘Energy Efficiency as a Service’ (MEETS) pilot program for up to 30 buildings
Seattle Office of the Mayor, April 2018

Energy Tools That Could Change The Game
Daily Journal of Commerce, February 2015

Energy a Utility Can Count On
The Magazine of the Green Economy, November 2014

This May Be the Most Innovative Energy Efficiency Financing Tool Yet
Green Tech Media, June 2013

How to keep coal where it belongs: in the ground
Crosscut, July 2013

News on Energy Alternatives—Wind, Efficiency Are In, Small Nukes Are Out
Union of Concerned Scientists, June 2013

“This approach has the potential to transform the market for energy efficiency. We look forward to helping get multiple pilot projects underway.”